On the Cover
Mosaic Artist Climbs Wall to Save Border Art 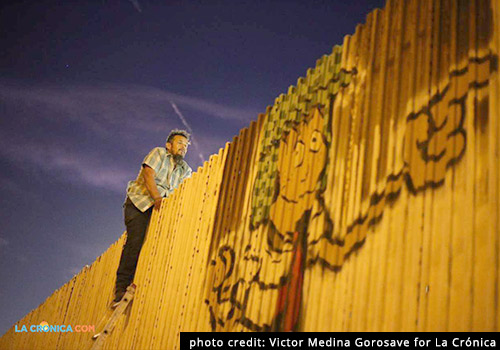 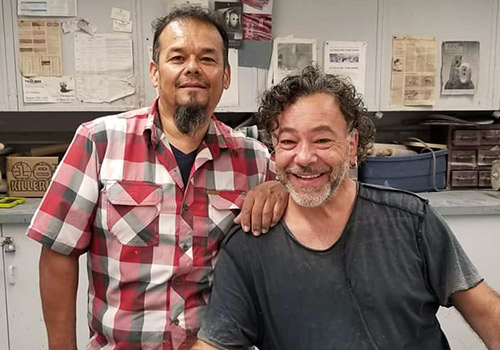 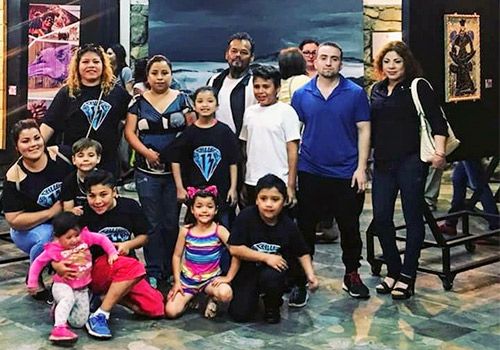 Thomas Gin (center, back) with students at La Joyita in Mexicali

Thomas Gin is a man without borders and yet a man who has grown up ever aware of a border.

SMC Community Ed's new mosaic arts instructor â€“ who begins in March â€“ crosses the U.S.-Mexico border every weekend when he travels from Los Angeles to an arts co-op he started in the poor Mexicali neighborhood he grew up in to teach mosaic art.

He has brought in artists from all over the world to work on a mile-long mural on a border wall separating Mexicali and Calexico â€“ as well as other nonprofit arts projects.

He risked major injury â€“ and indeed was tear-gassed â€“ by climbing to the top of that same border fence, which was being torn down for construction of a new barrier, to try to save the murals that had taken the international team of artists three years to create.

Gin moved from Mexico to Los Angeles at the age of 23. He gained an interest in mosaic art when he remodeled his home in Mexicali and included many stylistic designs with the material he had available. During the years that followed, he made numerous mosaics from recyclable materials.

He was formally taught the craft of mosaic by Carmelo Fiannaca, who taught several years for Community Ed before recently returning to his native Sicily. Fiannaca selected Gin to be his successor, and Gin will teach Introduction to Mosaic Art and Mosaic Art II beginning March 2.

The birth of Gin as a community arts activist was serendipitous â€“ and involved mosaic art. In 2013 he repaired a pothole in the street of his childhood neighborhood and covered it with a mosaic. When he received a positive reception from the neighborhood, he realized the power that the art of mosaic has to create social change in a community.

He then founded the nonprofit, non-governmental organization El Arte Salva: Proyecto Calle 13 to transform his childhood neighborhood, the barrio Santa Clara in Mexicali, one of the city's most impoverished neighborhoods.

In 2016 he transformed his home, just steps away from the border fence, into an artist residency that has attracted artists from Italy, Tijuana, Mexico City, and UC Berkeley.

In 2017 the group focused on painting murals on the border fence between Calexico and Mexicali. The destruction of that fence in 2018 led to Gin's dramatic effort last year to save the 35 murals.

As reported by Voice of San Diego, Gin had tried to physically drag one of the pieces across the border to save some of the murals. When that didn't work, he climbed on top of another one and refused to come down. A La CrÃ³nica photojournalist captured the tense moment.

When Gin wouldn't come down, Border Patrol officials fired tear gas in his direction, which caused him to lose his grip â€“ but he managed to avoid falling off completely. Officials then tried once more to talk things out with Gin. They promised to meet with him soon to see how Border Patrol could help save the murals.

Gin agreed, and climbed off. In the end, only one of 35 pieces was saved â€“ the mural of Aztec leader CuauhtÃ©moc by local artists Pablo CastaÃ±eda and Eduardo Kintero. The piece is currently displayed in the art collective's studio just a couple steps away from its original location.

The estimated $18-million project replaced just over two miles of a 1990s 12-foot barrier made of steel Vietnam War-era military aircraft landing mats with 30-foot bollards â€” poles placed close together to restrict entry but allow people on either side to see through.

In February 2018, Gin established La Joyita, a co-operative gallery that offers classes in the arts and hosts free events for the public. With about 50 students altogether, ranging in age from 5 to 80 years old, La Joyita has a gallery and performance stage and offers classes in mosaic, painting, sculpture, drawing, dance and more. Students from the University of Mexicali, UC Berkeley and USC help out at La Joyita, Gin said. And La Joyita participants help out the community by painting houses and curbs, filling potholes and more.

Gin has been teaching mosaic-making classes every other month at Stained Glassed Supplies in Pasadena since 2017. He has also taught mosaic-making workshops at Centro Estatal de Las Artes (CEART) in Mexicali. 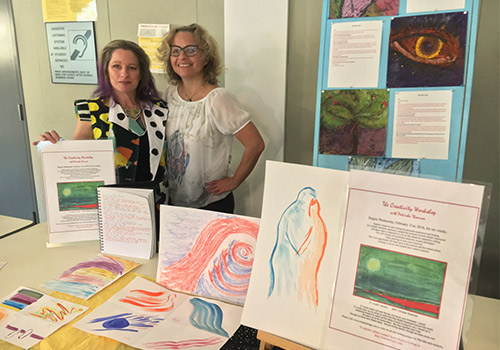 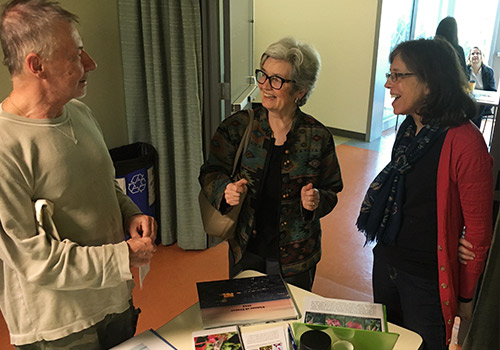 As usual, instructors will be on hand to talk about their classes, including commercial drone pilot training, health and fitness, stand-up comedy, sumi-e art, basketball, imaginative art, tarot and other subjects of interest. You'll be able to enjoy instructor mini presentations and demonstrations and receive 15 percent discounts if you register for classes during the Open House. Light refreshments will be served.

We were thrilled that we had a record-breaking Open House last year, and we hope to improve on that this year. During the four hours of the 2018 Open House, we had 104 registrations (each receiving a 15% discount offered during the event only), a 60 percent increase from the 2017 Open House. And our revenues doubled from the previous year!

You can drop by any time between 10 a.m. to 2 p.m., and we think youâ€™ll be pleased by the wide variety of classes that will be offered in spring, which begins as early as February 11, the first day of Spring semester, so donâ€™t miss it!

Please don't hesitate to contact us if you have questions about the Open House or our classes. You can call us at (310) 434-3400 (option #2), or email us at commed@smc.edu or visit our website at http://commed.smc.edu to register for classes online..

Behind the Scenes:
A Birthday Gift Even More Special! 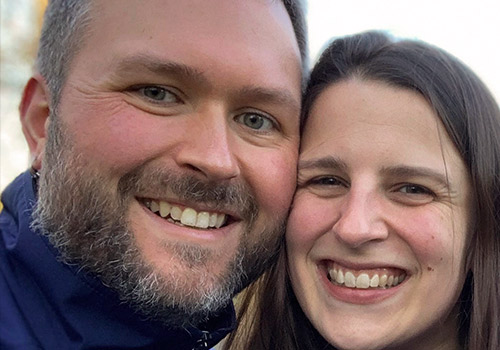 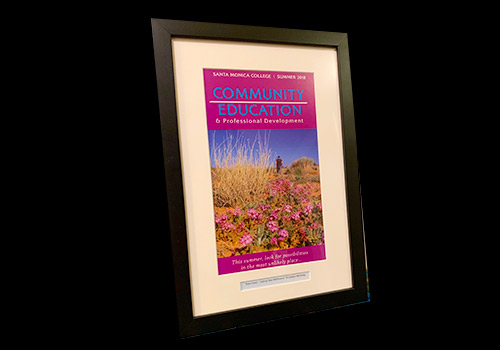 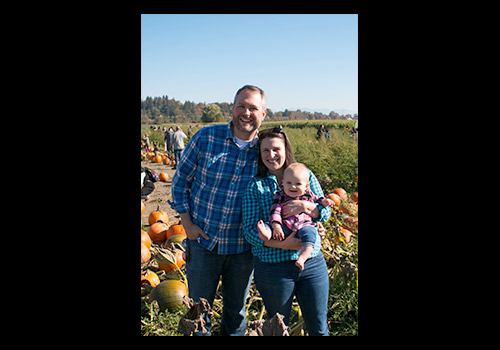 If you're already thinking about what you might get your sweetheart for Valentine's Day this year, consider the story of Sean Gehrke and his wife Colleen McKinney.

Sean wanted to surprise Colleen for her birthday last September and reached out to SMC Community Education to ask for a summer schedule of classes, whose cover is graced with a photo she had taken and entered into the annual Student Photo Contest. The image did not win the contest but Alice Meyering, SMC Program Coordinator of Community & Contract Education, liked it so much she used it for the summer catalog cover. Sean had it framed and presented to her for her birthday.

"I was so surprised, since it was not something I was expecting at all. He kept the secret very well!" Colleen said. "I thought it was a sweet gesture and very thoughtful. I know how hard it can be to come up with meaningful gifts."

Sean and Colleen, currently Seattle residents, lived in Los Angeles from 2011 to 2015. She was getting a master's in public policy at USC and he was working on his doctorate in education, also at USC. He is the director of the Office of Education Assessment at the University of Washington and she works for the nonprofit Center for Good Food Purchasing. They have a 1-year-old daughter Cora.

Colleen said a few years ago she bought a DSLR camera and enrolled in Larry Jones' photography class at SMC Community Ed to start learning more about the technical aspects of composition.

"I loved practicing what I was learning," she said, "as I explored the wide variety of landscapes around Los Angeles, from Joshua Tree to the poppies in Lancaster to Malibu and the urban scenes around central L.A. where I lived and worked for four years."

Beyond being a romantic gift, fitting for Valentine's Day, what else did it demonstrate?

"Since I started teaching myself photography," Colleen said, "Sean has been my biggest supporter and through this gift I could tell he was proud that someone else was excited about one of my photographs too." 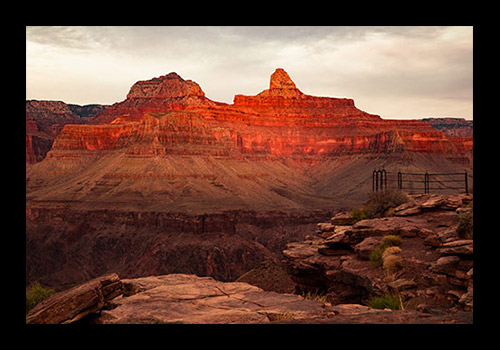 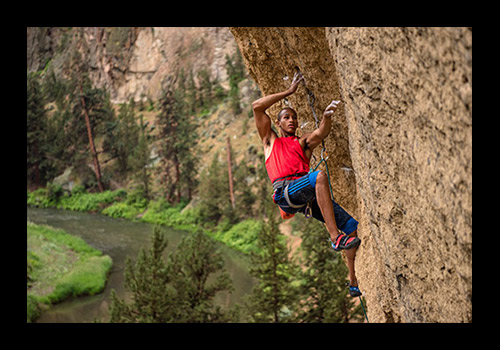 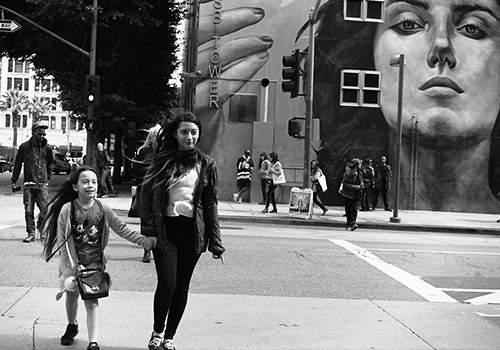 As the annual Student Photo Contest continues to grow each year â€“ both in quantity and quality of submissions â€“ we are excited to announce our fifth yearly competition. This year's deadline is noon on May 6.

We continue to be amazed that what started out to be a very modest contest actually captures the fascination of so many. We are also overwhelmed by the quality of the submissions we receive each year.

Altogether, the 2018 contest drew 150 submissions from 34 participants. We hope to increase that this year.

All current and former students â€“ regardless of whether a photo student with Community Ed or not â€“ are encouraged to submit their best work. Our 2017 winner, Victoria Bleeden, had not taken any photo classes at Community Ed when she entered her image for the 2017 contest.