Welcome to SMC Community Education, to meet the lifelong learning needs of the community, Community Education at SMC offers hundreds of classes to individuals who wish to explore their personal interests or enhance their careers. Our low-cost, not-for-credit Community Education courses are designed to enrich lives through hands-on workshops and lively classes in art, writing, dance, and many other areas. Occasionally, we will offer special classes for children and teens. Note that there are no transferrable units or credits for classes offered through our program.  There are no certificates of completion offered except for those courses where certificates are specifically mentioned.

Our fee-based professional development and continuing education programs and seminars strive to promote career development and professional training and certification. Classes on a wide range of topics are also offered online through our partnership with ed2go, a provider of online courses. 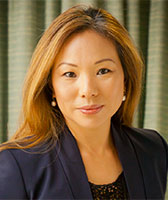 As the daughter of immigrants who came to this country with very little, Alice understands the value of education and the possibilities it holds for those who desire a better future. Barely speaking English when she first arrived in California in the early eighties, she went on to receive a BA in General Literature with a Minor in Chinese Studies from University of California, San Diego, and a MA in Comparative Literature from University of California, Los Angeles. Today, Alice considers herself a daughter of California as she has lived in the Golden state longer than she has lived anywhere else.

Alice has previous work experience in the import and export industry, and worked years as a corporate accountant with American International Group (AIG). Her many years of industry experience only affirms her belief that education, life-long learning in particular, is the key to personal fulfillment and professional satisfaction.

A devout believer in public service, Alice has been a site docent at the Getty Villa since 2010, educating the public even on weekends.